Outcome of the #MapLesotho Mapillary Challenge

The challenge was discussed here has been going for 7 weeks. On the 31st August 2015 it ended at midnight. Mappers all went to bed, early for once…. wondering if their score was high enough to rise a place or two. Of course the prize for 10 lucky mappers is a gorgeous smartphone, pre-loaded with several useful mapping apps with help from Eduardo, Peter and Jan from Mapillary.

What a roller-coaster ride it was for the last few weeks. Positions changed on a daily basis. Mappers engaged in banter in English and Sesotho. Generally the good spirits were wrapped in encouragement, for friends, for district loyalties and for people who were exciting us all by charging up the leaderboard.

Very valuable exchanges took place between mappers trying to tether to the internet using their phones, or using HOTOSM task manager, or even how to draw circular huts (Mokhoros) or using the ford tag. All of this re-inforced previously learned OSM skills. 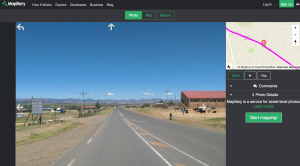 And since we began all previous #MapLesotho records were broken here are some:

The end result of the competition is that there are 10 winners, who are seen here. The Final table of the top 10 winners now makes a little Mapillary community in Lesotho who will eventually create a free-of copyright resource used to assist with accurate mapping. 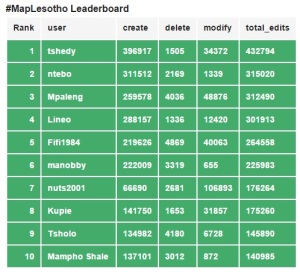 Huge lessons were learned from this phase of #MapLesotho. One is that OSM can be gamified. A second is that mobile phones are a reliable, and now affordable source of internet connection. Third is that Basotho Assistant Area Planners are capable of mapping (on average) 1,000 nodes per day. A fourth is that as mapping increases so does the quality of mapping. Fifthly, a critical mass of people mapping creates a community effect, people who are also mapping but not with winning the challenge as as target. Lastly, not all districts in Lesotho are created equal in terms of their enthusiasm to participate in #MapLesotho.

Finally, on behalf of all judges, contestants and OSM enthusiasts I want to thank Mapillary for supporting this initiative through sponsorship of this phase and the use of their wonderful free resources to help #MapLesotho in the future. And on behalf of our sponsors I want to congratulate all those who took part. Now, instead of monitoring use, animating new users, and I myself can get back to mapping as DeBigC.